On 13 March, the World Health Organization (WHO) declared Europe the “epicentre” of the coronavirus pandemic. WHO’s president, Dr Tedros Adhanom Ghebreyesus, called on European countries to use aggressive measures to promote social distancing and reduce people’s movements to contain the spread of the virus. Several European governments have since effectively confined their citizens to their homes, in the greatest restriction of freedom of movement in Europe since World War II.

In these countries, governments and civil servants are now facing the huge tasks of supporting healthcare systems, maintaining essential services and propping up free-falling economies. But meanwhile, they must work to make it economically and socially sustainable for people to stay in their homes for long periods – providing the income, activities, public information, and access to supplies that will be essential to widespread compliance, public order and morale. Here we take a look at the measures taken by Italy, Spain and France – three of the world’s five worst affected countries, by number of deaths – to ensure that people can feed themselves, work from home, and continue occupying themselves and educating their children.

Italy was the first European country to decree the confinement of its population. This measure affected the Lombardy region and other areas in the North of the country first. But on 10 March, prime minister Giuseppe Conte extended the lockdown to the entire country. “I am going to sign a decree that can be summarised as follows: ‘I’m staying at home’,” Conte said at the close of his televised speech.

One of the main objectives of the Italian government is to try to maintain people’s work and leisure routines as much as possible. To do so, the Ministry of Technological Innovation has launched the initiative Solidarietà Digitale (Digital Solidarity), with the aim of helping “people, professionals and companies to continue with their activity and maintain their lifestyle habits”.

As part of this, the government created an online platform through which citizens can access free and remote services from a host of public and private entities. Since its launch, the number and variety of services has grown rapidly, with people now able to access a wide range of e-learning services, professional tools to facilitate teleworking, and entertainment content. The government has also appealed to hardware and software technology companies to provide devices to facilitate distance learning for school pupils.

Meanwhile, state-owned companies are rising to the challenge of providing service continuity. The Italian postal company Poste Italiane, for example, has adapted its services to guarantee that people are able to send mail and money and to pay taxes without leaving home.

Another priority for officials is to fight fake news about coronavirus. In order to facilitate the dissemination of truthful information and official data, the Ministry of Health has a centralised portal with advice, updated figures and materials designed for distribution on social media.

Spain: essential supplies guarantee and a focus on culture

Four days after Italy, Spain declared a state of emergency and ordered citizens to stay indoors until at least 28 March. Faced with economic paralysis and fear of possible shortages, the government has legally guaranteed the supply of food, medicine, and hygiene and cleaning products to Spanish families, in addition to fuel, electricity and other energy sources. The law underpinning this move allows the government to intervene in companies, and even to escort vehicles carrying products considered essential goods.

Private distribution companies are themselves strengthening their operations, supported by concrete actions by the central government and the police – such as the relaxing of driving and rest times required by law for carriers. “So far, we are being offered a range of assistance by the state security forces,” Francisco Aranda, head of the Spanish logistics and transport association, told El País.

As for education, the closure of schools, universities and other places of learning has disrupted the habits of both students and teachers and their families. In addition to readjusting the school calendar to ensure that “all students can finish the year without being adversely affected by the suspension of classes”, according to education minister Isabel Celaá, the government is also promoting a series of digital educational resources.

For example, the government has opened access to the network Procomún, led by the National Institute of Educational Technologies and Teacher Training (INTEF), which includes thousands of articles, podcasts, webinars and other content. And the Spanish National Library is expanding the educational resources available through digital content for younger children.

In the field of entertainment and culture, the government has launched the #LaCulturaEnTuCasa (Culture at home) campaign, with the aim of promoting the use of cultural resources available online. These include access to the digital archive of the National Library, and to classic films from the Spanish Film Archive through a channel on Vimeo.

In a further bid to keep people occupied, the most important public museums in Spain are promoting virtual visits to their permanent and temporary exhibitions. These include the Museo del Prado, Reina Sofía and Museo Thyssen, as well as the country’s best-known archaeological site, the Altamira caves. It is also possible to watch online performances from the National Institute of Performing Arts and Music and programmes from the archive of public television provider RTVE.

As in Italy, raising awareness so that citizens understand the importance of staying at home is one of the Spanish administration’s key priorities. To achieve this, the authorities have launched the campaign #EsteVirusLoParamosUnidos (We stop together this virus) through both public and private media and its social networks.

When he announced the lockdown on television, French president Emmanuel Macron urged people to use the time to read and reflect on what is essential in life. Those working from home and looking after children are likely to be too busy.

The government estimates that four out of ten jobs can be done at home. Under new measures announced by Macron, those who don’t fall into that category and who have children under 16 are allowed to stop working – as if they were on sick leave – without having to follow an administrative procedure, while employers can claim up to 90% of salaries through the national health insurance system.

For health service staff and other essential functions, auxiliary workers are providing day care and meals for their children in school buildings, making use of a service that has long been available in France for all children during school holidays.

The government is also taking steps to enable students to continue their education remotely. The education ministry has set up pedagogical continuity programmes for each age group; the country’s CNED national centre for distance education is making lesson packs available to parents through its website; the Lumni platform provides resources from the country’s radio and television stations for use by teachers and the public; and a comprehensive list of distance educational resources is available on the Eduscol website.

Meanwhile, the labour ministry is taking steps to minimise disruption to the 1,000 centres in France that provide training for 500,000 apprentices. It is working with each of the country’s regions to create materials for use by training bodies, and is encouraging daily personalised audio-visual coaching.

To support supply chains, the government has relaxed restrictions on Sunday working in the distribution sector and is considering easing regulations on recruitment, overtime and night working. Agricultural equipment suppliers are allowed to stay open, and it is still possible to buy a computer or get it fixed, buy parts for the car, visit a DIY store or go to the vet. As for food, the government says that even an extended lockdown won’t lead to shortages unless people ‘panic buy’ more than they normally consume, as is currently the case in the UK.

Text written together with David Whitehouse and published in Global Government Forum. 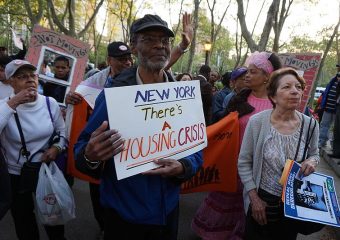 Next Post (n) Housing rents in big cities: What happens if we regulate them?